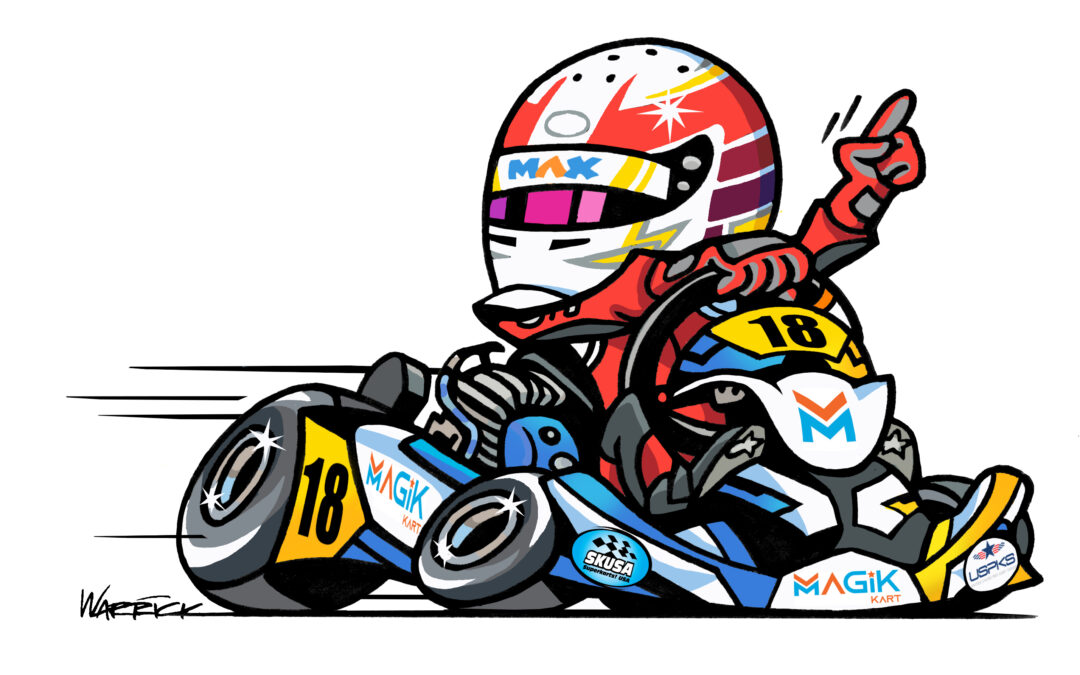 Max races Daytona and learns about what you can receive when you believe.

Max is a 10-year-old racing driver with big-time speed. He is from a family of race car drivers and grew up at the track. One of the first times Max can remember watching his Dad race was at the Daytona International Speedway. In 2016, when Max was five, his Dad won a championship race at Daytona. Now, Max was competing at the same track for the first time.

Daytona International Speedway is in Florida. To get there, Max traveled over 1,000 miles south from his home in Cleveland, Ohio. When he and his Magik Kart teammates finally arrived, they walked down a street lined with palm trees on their way into the track. Max’s coach, Conrad, told the team about the history of Daytona.

“Daytona International Speedway is the most legendary motorsports track in America,” Coach Conrad said. “It was built in 1959. Races like the Daytona 500 are held here every year. There are seats for over 100,000 fans. It is an enjoyable track to drive, and I am excited for you to experience it.”

Max began racing karts or go-kart in 2021. After winning several local and regional events, he moved up into national races for the 2022 season. Daytona would be his first national race. He would be competing against 25 of the best drivers in his age group from all over the country and was looking forward to the challenge. But Max was also a little nervous. It would be tough racing against the best drivers from California, New York, Texas, Arizona, Illinois, and other states. Even while feeling butterflies in his stomach, he was very excited.

Just like anyone challenging themselves to get better, Max wondered how he’d do in the race. Did he belong with the best drivers in the country? Was he good enough to compete with them? Max is a very confident person and a talented driver. But it’s natural for anyone to ask themselves those types of questions sometimes. Before the qualifying session for the race began, however, his coach gave him some valuable advice.

“You have worked hard, practiced hard, and did everything you needed to do to get ready for this race,” Coach Conrad told Max. “Now, you need to believe you are good enough because you are. Believe you will receive the result you want. Believe that no matter what happens in the race, you will know what to do because you are prepared for this moment. Believe, and you will receive.”

A driver earns their starting position for each race based on their lap time during the qualifying session. The faster you go, the better place you have at the starting line. It would be necessary for Max to have a fast qualifying session for a race against so many top drivers. His coach’s advice before the qualifying laps helped. He took that advice to heart and got behind the wheel, believing he would do his best.

When the qualifying session began, Max took off like a rocket! He weaved in and out of every turn with the skill of a pro. Max accelerated as fast as possible down the straightaway and felt like a jet flying through the clouds. He zigged and zagged around every bend just right and was moving fast. Max knew his time would be good when the qualifying session was over, but he didn’t know how good. It turns out Max qualified with the 3rd best time out of 25 drivers!

Go behind the wheel and ride along with Max by watching this YouTube video of his 3rd place qualifying session at Daytona International Speedway!

“Great job, Max!” his Dad said as he walked over the where he was standing with Conrad.

“We’re so proud of you!” Max’s Mom added before his litter brother came up and gave him a high-five.

After the qualifying session, Max was pretty excited. He had just driven at top speed on a fantastic race track. He ate lunch with his family and teammates before meeting his coach in the garage. Conrad discussed the strategy for the race with Max a few minutes before it began.

“You will be starting in the third position,” Coach Conrad explained. “There will be 12 rows of two karts lined up next to each other. That means you will be in the second row with 20 drivers behind you. If you can stay in front of those karts, you will earn a trophy and a trip to the podium. If you can pass the two in front, you will win.”

Max had won races before and understood how lining up at the starting line worked. But it always helped to review the basics. After discussing the race strategy, he was ready to go to work. Max grabbed his helmet and ran to his kart—it was racing time!

“Hey Max, don’t forget,” Coach Conrad yelled as Max darted out of the garage. “Believe, and you will receive!” 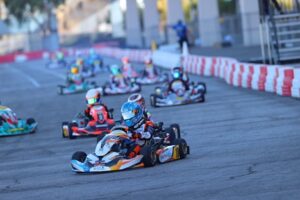 Max kept believing and got off to a quick start when the race began. There was a lot of traffic on the first lap. It was a little tricky to make his way through the karts who were bunched up at the starting line. By the third lap, Max had steered himself into a good position. He got into the same rhythm and pace that he found during qualifying. Max cruised into each turn at just the right speed. He also went whizzing down the straightaways past the fans in the stands. A couple of drivers tried to pass him, but he held onto his spot. Max got faster and faster as the race went on and was having fun heading into the final lap.

His family was cheering loud as Max got closer and closer to the finish line. He couldn’t hear or see them from inside his racing helmet, but he knew they were rooting for him. Max put the pedal to the metal and zoomed as fast as his kart would carry him. He would not catch the two drivers who started the race in front of him, but nobody caught up to Max, either. When the checkered flags waved to signal the finish, Max had done it. He earned his first podium in a national race! 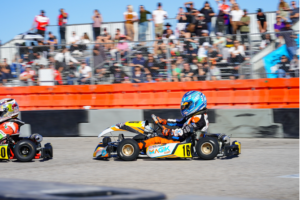 His friends on the Magik Kart team were in the garage to meet Max and celebrate. Coach Conrad was there, too, along with Max’s parents and brother. Everybody was slapping him on the back and giving him high-fives.

“Well, Max,” Coach Conrad said during the celebration. “You believed, and now it’s time to receive your trophy! The podium ceremony is about to start—you better get up there!”

Max was very grateful for the support of his family and coach. He also appreciated how happy his teammates were for him. As a 10-year-old kid, Max enjoyed the podium celebration, too, and was excited about how cool the new shiny trophy would look in his room. But Max also learned a valuable lesson while racing at Daytona that he would always try to remember. If you believe, you will receive.

Racing with Max is written by Brendan Bowers to help raise awareness for Coach Sam’s Scholars in support of their inspirational students and teachers.